Representing the Native Presence in the “Occupy Wall Street” Narrative

Unsettling America Editor’s Note: In the interest of furthering the discourse surrounding the ongoing legacies of colonialism and cultural genocide, we have chosen to repost this excellent analysis from Native Appropriations regarding various #DecolonizeTogether related images, most of which have appeared on this site. It is crucial to be accountable for the use of any problematic imagery, language, etc., and we hope this will contribute to the ongoing discussion.

I have yet to feel connected to the Occupy Wall Street movement, or even the Occupy Boston movement happening here in my backyard. I consider myself an activist, an at-times radical, and I clearly feel passionately about advocating for voices unheard and on the margins. But, Occupy Wall Street hasn’t appealed to me. There has been a lot of coverage as to why people of color, and Natives in particular, are having mixed emotions about this whole movement–and I agree with a lot of those sentiments. But I even have issues with the language and images being used to represent the Native presence in the movement. I’m not easily pleased, apparently.

Jess Yee (who I’m obsessed with) wrote a fabulous piece for Racialicious pointing out the inherent issues with calling the movements “Occupy….”, namely, that, oh, these lands are ALREADY OCCUPIED and sites of ongoing colonialism. She quotes John Paul Montano, an Anishinabe writer and his open letter to the “occupiers”:

I agree completely. But, being the person that I am, I also feel the need to deconstruct images and language–I’ve got a critical filter that can’t be turned off. So let’s look at the image above, the one that’s being widely used to “complicate” the Occupy Wall Street narrative. 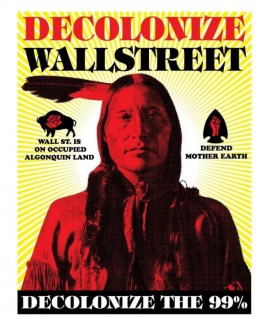 This image (which I can’t find the original source for, so please send it over if anyone knows), was shared far and wide on Facebook, and even made it to the Indian Country Today article that quotes Jess’s piece. From my ventures around the internets, this seems to be “the” image used to push back on the narratives of colonialism in the OWS movement.

But, in my opinion, this image only serves to further stereotype Native people and present mis-information about the land which is currently being double-occupied. We’ve got the red and black motif, the Edward Curtis stoic Indian warrior with the eagle feather and buckskin–who’s clearly from a Plains community, with a buffalo, an arrowhead, and a red power fist. Reads like a list of “10 things to include to make it recognizably Indian.”

Yes it acknowledges Wall St. is on “occupied Algonquin land”–but one problem: Manhattan is Lenape land. So we’ve got the stereotypical Plains imagery to represent a movement that is taking place on the East Coast. Everyone already forgets that there are Nations and Indigenous Peoples in the East, and this just continues to marginalize and erase their ongoing presence in their homelands.

Luckily, I’ve come across some posters that do a better job at representing the issue:

This at least has a Lenape woman (Jennie Bob, picture from 1915), and I like that the message is clear at the bottom: “Occupied since 1625”–because, let’s be honest, I really don’t think a lot of non-Native people even know what “decolonize” means, which makes it easier for them to dismiss the underlying issues. But, it’s still a historic photo, which could be argued puts the issue in the past. I still like it way more than the original (again, if you know the source, let me know). 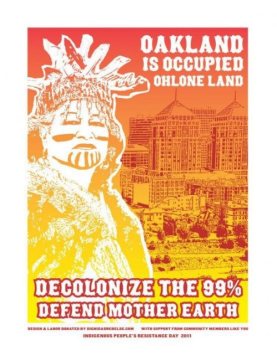 This poster comes from Oakland, and I like the juxtaposition of the current Oakland skyline with the Ohlone tribal member. No Plains warrior here.

I want to end with pointing out that not all of the “Occupy” movements have marginalized Native peoples and ignored legacies of colonialism. Occupy Denver has taken a bold stance, incorporating a 10 point platform from the Denver American Indian Movement into the overall message of the movement. The points can be read in full here, but here is an expert from the intro:

If this movement is serious about confronting the foundational assumptions of the current U.S. system, then it must begin by addressing the original crimes of the U.S. colonizing system against indigenous nations. Without addressing justice for indigenous peoples, there can never be a genuine movement for justice and equality in the United States. Toward that end, we challenge Occupy Denver to take the lead, and to be the first “Occupy” city to integrate into its philosophy, a set of values that respects the rights of indigenous peoples, and that recognizes the importance of employing indigenous visions and models in restoring environmental, social, cultural, economic and political health to our homeland.

Lulululu’s to that.  If every “Occupy” City began with that foundation, I sure as heck would be out there with my signs and warrior-activist attitude. But you know I’d be breaking up some faux-“Indian” drum groups along the way. Appreciation without appropriation, folks! geez.

So what do you think? Is it more important to disrupt the narrative with images that non-Native folks already recognize and resonate with? or are the images like the “Decolonize” poster doing more harm than good? And what do you think about Occupy Denver?

Awesome articles you should read:

(Thanks to Kannon, who was the first one to point out to me that the Decolonize Wall Street poster was problematic.)