Settler Fragility: Why Settler Privilege Is So Hard to Talk About 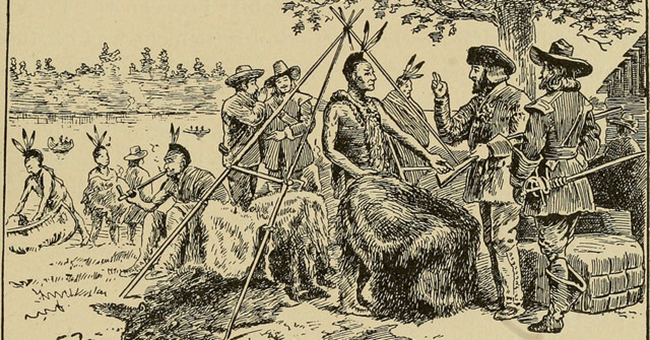 From “Our colonial history from the discovery of America to the close of the revolution,” 1915. French trading with Native Americans.

Robin DiAngelo’s brilliant 2018 manifesto on white fragility was a much-needed truth bomb at a time when it’s more clear than ever that we are light years away from the “post-racial state.” Perhaps most important about the book was its clarity that racism is systemic and structural, that no white people are immune from it, and that their fragility about it is based on a belief that they are being judged as bad people (the good-bad binary). In this second part of a two-part series (see part one here), I take on the similar but very different concept we in Indian country call settler privilege and its companion, settler fragility.

Settler fragility stems from settler privilege, which is similar to white privilege in that it is systemic, structural, and based on white supremacy, making it difficult to identify. Only in some ways, settler privilege is far more covert and cunning. The reason is because of the ubiquitous ways the US is normalized; that is, the US settler state is the “water we swim in.” US citizens of all races and ethnic groups have been indoctrinated their entire lives with messages designed to foster a sense of national pride and belonging in the making of what has been called an “imagined community,” which always occurs on Indigenous lands. Their citizenship and their very identity are taken for granted without critical consciousness about the US’s contradictory foundational structures and narratives.

Settler colonialism is said to be a structure, not an historic event, whose endgame is always the elimination of the Natives in order to acquire their land, which it does in countless seen and unseen ways. These techniques are woven throughout the US’s national discourse at all levels of society. Manifest Destiny—that is, the US’s divinely sanctioned inevitability—is like a computer program always operating unnoticeably in the background. In this program, genocide and land dispossession are continually both justified and denied.

Like white fragility, settler fragility is the inability to talk about unearned privilege—in this case, the privilege of living on lands that were taken in the name of democracy through profound violence and injustice. Like white privilege, white supremacy is also at the root of settler fragility. The difference is that foreign invasion, dispossession of Indigenous lands, and genocide were based on (white) European religious and cultural supremacy as encoded in the doctrine of discovery, not racial supremacy. And, unlike for other people of color who have made significant legal gains in the US legal system, the nearly two-centuries-old doctrine of discovery is at the foundation of the legal system that still paternalistically determines Native lives and lands.

Settler privilege thus simultaneously implicates and is beyond racism, which is one reason why, paradoxically, even non-Native people of color can experience a type of privilege and fragility. Fragility stems from the need to distance oneself from complicity in settler colonialism, in what some scholars have called “settler moves to innocence.” The good-bad binary is part of this distancing impulse, because like racism, nobody wants to be associated with genocide and injustice, especially in a country that touts its democracy and equality, and especially for people who have been oppressed by it in other ways. But compared to white privilege, this is what makes settler privilege so much more beguiling and difficult: it cuts to the core of American identity in all its iterations, subtly calling into question the legitimacy of the US and the sense of belonging on the land.

Dina Gilio-Whitaker (Colville Confederated Tribes) is a lecturer of American Indian Studies at California State University San Marcos, and a consultant and educator in environmental justice policy planning. Her research interests focus on Indigenous nationalism, self-determination, environmental justice, and education. She also works within the field of critical sports studies, examining the intersections of indigeneity and the sport of surfing. She is co-author with Roxanne Dunbar-Ortiz of Beacon Press’s “All the Real Indians Died Off” and 20 Other Myths About Native Americans, and her forthcoming book, As Long as Grass Grows: The Indigenous Fight for Environmental Justice from Colonization to Standing Rock, is scheduled for release by Beacon Press in April 2019. Follow her on Twitter at @DinaGWhit and visit her website.

This entry was posted in colonialism, Decolonization & Unsettling and tagged Doctrine of Discovery, Settler Colonialism, settler moves to innocence, settlers. Bookmark the permalink.