Karl Marx’s own ambiguous and sometimes contradictory views on colonialism meant that the Second International would debate over the correct view on the matter. Donald Parkinson gives an overview of these debates, arguing that Communists today must unite around a clear anti-colonial and anti-imperialist program. 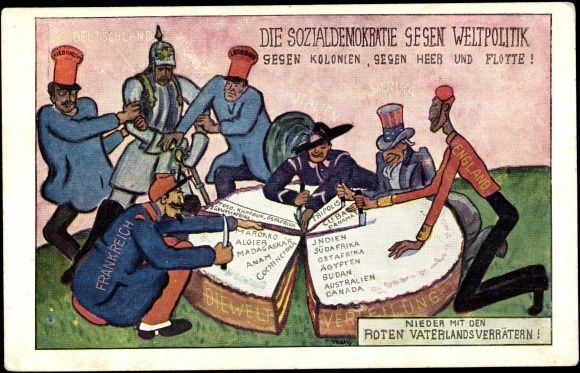 Reactionary political cartoon. Reads: “Social-Democracy is against world politics; against colonies, against the army and navy!”

Today, when Marxism seems to be under constant intellectual assault, we hear the claim that Marxism is a Eurocentric ideology, that it is a master narrative of the European world. It could be tempting to simply dismiss this claim on its face. After all, most Marxists today live in the non-European and non-white world, inspired by the role Marxism played in anti-colonial struggles. Yet we should always pay attention to our critics, regardless of how bad-faith they may be. They can help us understand our own blind spots and weaknesses and better understand ourselves. As a result, we should take the question of Eurocentrism seriously and engage in a critical self-reflection of our own ideas. A closer look at both the works of Marx and the history of Marxist politics tells us that there were indeed Eurocentric strains in Marx’s thought. Yet through its capacity to critically assess itself Marxism has, to varying degrees of success, overcome its Eurocentrism to develop a true universalism, against a false universalism that only serves to cover for a deeper European provincialism.

Marxism developed in Europe as a worldview designed to secure the emancipation of the world from class society. This is the source of internal tension within Marxism: on one end there is the universalist scope of Marxism, an ideology designed to unite all of humanity in a common struggle. On the other end, there is the source of Marxism in the continent of Europe, an ideology that was shaped by the specific processes of capitalist development that propelled Europe into an economic power standing above the rest of the world. It would be foolish to simply dismiss charges that Marxism contains Eurocentric elements that exist in tension with its universalism. There is no better example of these tensions in Marxism than the different views on colonialism within the movement.

Colonialism in the history of Marxist thought served as a challenge for Marxism to overcome its own Eurocentrism. Within the works of Marx one can find different approaches to colonialism that could be read as apologetic to colonial expansion or firmly opposed to it, supporting the struggles of colonized people against their dispossession. As a result, the followers of Marx who formed the mass parties that came to be known as the Second International did not have a single position on colonialism that they could take from Marx. There was instead a series of often contradictory positions on colonialism within his work that provided justifications both for supporting colonialism and opposing it. There was also a theoretical heritage within Marxism, economistic developmentalism, that would be used to justify colonialism in the name of socialism.

To better understand these tensions in Marxism, we should examine Marx’s views on colonialism and the first major debates on colonialism in the Second International. These debates are an important part of a greater historical narrative, in which Marxism developed as an ideology in Europe and became the siren song of countless anti-colonial revolts against European domination. Marxism was able to overcome its initial Eurocentrism, but not without a struggle internal to itself and its intellectuals. In better understanding the history of this intellectual struggle, we can better identify the theoretical errors that held Marxism back from becoming a truly universalist worldview, which could serve as a political creed for the emancipation of the world, not only Europe.