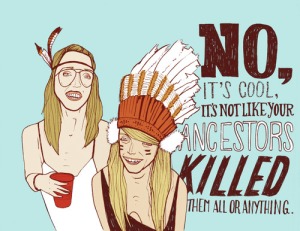 By Scott Morgensen, Unsettling Ourselves

My presentation to the Dakota Decolonization class echoed my broader teaching and writing by centering the principles of Indigenous feminist thought and its ties to women of color and Third World feminism. Andrea Smith in her book Conquest: Sexual Violence and American Indian Genocide (2005) writes that colonization and heteropatriarchy inherently interlink, so that opposition to one requires opposition to the other. Her Indigenous feminist argument links to the principle of intersectionality in women of color and Third World feminisms, which appears in the Combahee River Collective’s “A Black Feminist Statement” (1977) in the claim that “all the major systems of oppression are interlocking.”

I learned to commit to these principles by investigating and challenging the power and privilege that structure my life as a white, educationally-privileged, US American male, non-transgender and (temporarily) able-bodied. My lifelong experience as a queer person who has suffered from heteropatriarchy did teach me about oppression and resistance, as did my family’s struggles with work and income. But given my social locations, those experiences were not sufficient to teach me that colonization is the condition of heteropatriarchy and capitalism in the U.S., or that all the major systems of oppression intersect. Learning this required being challenged by Indigenous and women of color and Third World feminists to study how colonization, whiteness and racism, capitalism, ableism, and heteropatriarchy interlink in the world and in my life. Such an understanding contextualizes all my words about settlers and settlement.

My writing critically investigates the desires of settlers to feel connected to Indigenous land and culture. In her contribution to this sourcebook, Waziyatawin discusses Albert Memmi’s distinction of the colonizer and the colonized. I intend my use of the term “settler” to be compatible with Memmi’s term “colonizer” and with its discussion by Waziyatawin. “Settler” is a way to describe colonizers that highlights their desires to be emplaced on Indigenous land. The settler desires I study are not tied to any particular politics. Among settlers, “conservatives,” “liberals,” and “radicals” (to name only a few) share similar desires that simply express in varied ways. For instance, settler radicals, including anarchists, have proven capable of forming movements that profess to be anticolonial even as they claim Indigenous land and culture as their own. I recognize among settler radicals a difference between those who pursue a politics that tries to sustain their ties to Indigenous land and culture, and those who question any desire to possess them. I promote the latter in this essay as a way to radicalize settlers to challenge settler colonialism and support Indigenous decolonization.

If settler radicals challenge their desires to live on Indigenous land, they also will challenge their desires to study, practice, or feel in any way linked to Indigenous culture. I am thinking here of Andrea Smith’s critique in Conquest of spiritual appropriation as a form of colonial and sexual violence. I also think of Waziyatawin’s statement to the Dakota Decolonization class of the relationship between Indigenous land and spirituality, which makes decolonization of land necessary to the practice of Indigenous spirituality. With these claims in mind, settler radicals must ask how their feelings of attachment to Indigenous land and culture enact appropriation and violence. Settlers are supposed to be people who connect to Indigenous land–the land where they were raised, or that they inherit after settling it–by studying Indigenous history and culture and linking it to their lives. Historically, non-Natives became settlers by adapting Indigenous dwelling sites, travel routes, place names, modes of gathering or cultivating food, and spiritual knowledges and practices.1 These acts are part of the normative function of conquest and settlement. Thus, decolonization does not follow if settlers simply study and emulate the lives of Indigenous people on Indigenous land.

Settler radicals desperately need to investigate this truth. It is relevant in particular to those for whom anarchism links them to communalism and counterculturism, such as in rural communes, permaculture, squatting, hoboing, foraging, and neo-pagan, earth-based, and New Age spirituality. These “alternative” settler cultures formed by occupying and traversing stolen Indigenous land and often by practicing cultural and spiritual appropriation. Their participants have imagined that they act anti-colonially by “appreciating” Indigenous culture or pursuing what they imagine to be Indigenous ways of life. But using these methods to try to be intimate with Indigenous land and culture expresses settler desires without necessarily contradicting them. Critiquing and separating from these practices may be necessary for settlers to commit to work for Indigenous decolonization.

I write these brief thoughts in order to introduce and invite broader conversations whose complexity my words here have not begun to fulfill. My statements and questions mean not to limit conversation but to open it. I have asked settler radicals to continually pursue critical reflection that will un-settle their senses of self and relationship to place. I am playing here on multiple meanings in the word “unsettle,” notably its correlation with the word “displace.” Certainly, in this context, “unsettling” suggests the work of displacing settlers from their possession of Indigenous land. The word reminds settler radicals to divest of their desires to occupy Indigenous land in order to work for decolonization. But “unsettling” also can invoke the qualities that settlers try to avoid feeling, such as uncertainty, discomfort, and–in an emotive sense–displacement. Colonization is an ongoing process making settlers desire the certainty and comfort of emplacement. Such feelings are incompatible with the commitment to work for Indigenous decolonization. Embracing uncertainty and discomfort–getting used to these feelings, and learning to live well amidst them–will be the productive and enlivening result of settlers displacing their centrality on stolen land and committing to work for Indigenous decolonization.

1    Among the wide array of writing on these histories by scholars in Native Studies, my words here refer in particular to Vince Deloria, Custer Died for Your Sins: An Indian Manifesto (1969) and to Philip Deloria, Playing Indian (1998).