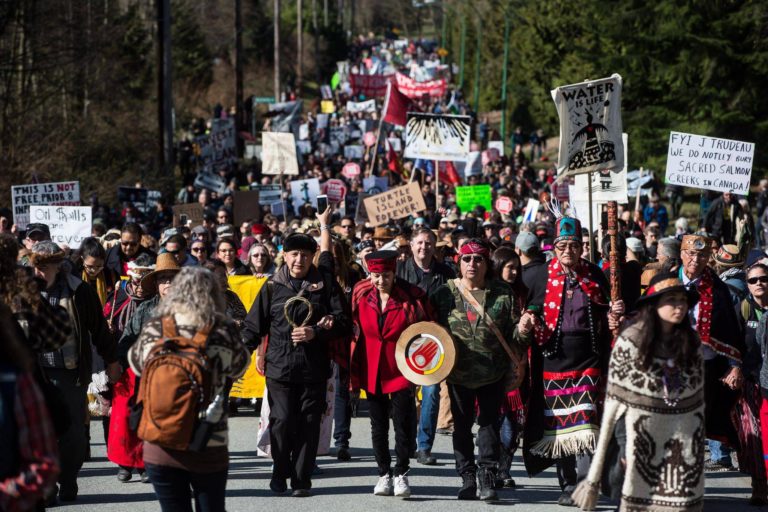 Protest against Trans Mountain pipeline in BC.

I write as a settler on this land. I am not speaking on behalf of Aboriginal people but rather as an unconditional ally to their struggles. I will specifically address Indigenous resistance in the form of re-occupation of Turtle Island and in particular of so-called Canada. Re-occupation of the land is a kind of resistance and decolonization to dismantle settler relations to the land as commodity or as property. It is a form of what Nishnaabeg Leanne Betasamosake Simpson calls Indigenous resurgence that is based on restoring Indigenous relationships with the land and how to treat the land in a reciprocal and profoundly respectful way: “It refuses dispossession of both Indigenous bodies and land as the focal point of resurgent thinking and action…It calls for…radical resurgent organizing as direct action…against the dispossessive forces of capitalism, heteropatriarchy and white supremacy. These are actions that engage in generative refusal of…state control…and they embody an Indigenous alternative”. (Simpson 2017). As I understand it this alternative implies both the return of the land to Aboriginal people (and thus the dismantling of settler colonialism) coupled with the literal social, political and economic overthrow of the settler, capitalist state that has wreaked havoc on the planet. More on the tactic of re-occupation shortly. But first, some context on how settler colonialism and ecocide go hand in hand is in order.

Ecocide or the annihilation of the planet and our very life support system is also an industrial genocide of Indigenous peoples symptomatic of what many scholars have called the cancerous diseases of capitalism and settler colonialism. They are both predicated on infinite expansion and growth, the reduction of earth to a lifeless commodity, the mindset of land as frontiers of conquest and the obliteration of what Naomi Klein calls sacrificial zones and people standing on their way. Under capitalism “the expansion of commodity frontiers fosters conditions of social and environmental degradation and conflict.” The commodification process inherent in capitalism begun with the sugar complex in the fifteenth century, spurred early colonialism, and continues to operate in settler colonialism and land grabs through mining and fossil fuel industries and corporate interests: “[f]urther expansion is possible as long as there remains un-commodified land, products, and relations. Here land should be seen the equivalent to the space to grow food or to extract minerals, or the sea for oil or gas exploration” (Conde and Walter 2015). Although today the process of commodification has been exported from the European colonial empires to its colonies and it is rampant globally under the new neo-liberal world order it was initiated within Europe with the uprooting of European peasants, their loss of traditional forms of subsistence, their disconnection from the soil and natural environment, the subsequent flow of products from the countryside to the big urban centers and the degradation and toxification of the places of extraction and consumption. The rise of wage labour accompanied the commodification of land and labour while the “dispossession of subsistence farmers and herders from common land resulted in the proletarianization of rural populations, who flooded to urban centers in search of work…Those still in possession of land generally became indebted, fostering instability and overexploitation by capitalists. This process led to declining productivity, driving the frontier further in search of fresh supplies of labour and land.” (Conde and Walter 72).

END_OF_DOCUMENT_TOKEN_TO_BE_REPLACED

Decarbonization as Decolonization: The Case of the Northern Bay Area

A meeting took place a few months ago at a prominent university in the Bay Area, California, between activists from Richmond and Pittsburg, and local students. The community activists explained the serious problems associated with the imminent expansion of infrastructure supporting the carbon economy–specifically, the rapidly growing oil industry of North America.  As I’ve written in this recent piece, this infrastructure already has a history of severely degrading the health of locals; thus, its expansion can only mean the simultaneous expansion of externalities that local communities must bear.

At the meeting, remarks were made as to how it felt like they are “being invaded by these oil companies”–companies that include multinationals like Chevron and Royal Dutch Shell.  Another key observation was the domination of these companies in local politics; for example, Chevron spent around $1.2M on the Richmond City Council election in 2012.  An activist from Pittsburg commented on how these companies always find the most corrupt and malleable cities in which to build their dirty businesses, which makes perfect sense–these are the areas where bearing the costs of environmental externalities can be most easily avoided, due to more lax regulations and a decreased likelihood of litigation.

These characteristics that define the struggle of Northern Bay Area communities–invasion and domination by foreign actors, the extraction of value, and the localization of externalities–are strongly reminiscent of colonialism, and the historical practices that Europe (and in general, the abstract entity of global capitalism) took toward controlling the resources and populations of the Third World.  Time and time again, especially in the 20th century, powerful capitalists and the militarized states that backed them took control of resource-rich regions across Latin America, Africa, and Asia, exploited and repressed local populations, and extracted huge amounts of value, all while leaving locals to deal with the externalities of the value-production and resource-extraction processes.