Born on the Fourth of July: Counterinsurgency, Indigenous Resistance, and Black Revolt 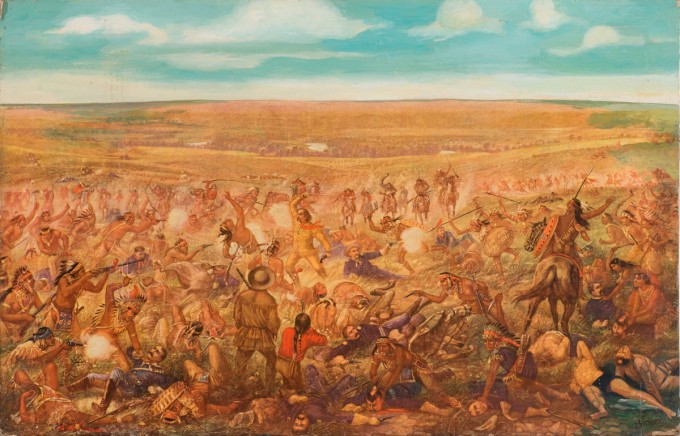 Commissioned by St. Louis beer-maker Anheuser-Busch in 1889, Otto Becker famously depicted “Custer’s Last Fight” for beer advertisements, adding to the myth of a valiant last stand scenario and the self-defense of an invading settler nation.

By Nick Estes, The Red Nation

On June 25, 1876, an alliance of Lakotas, Cheyennes, and Arapahos blew out the candles on the United States’ birthday cake. A week before celebrating one hundred years of “liberty,” at the Battle of Greasy Grass the historic Indigenous alliance wiped from the earth lieutenant colonel George A. Custer, a less well-known Civil War officer, and more than 250 of his men of the Seventh Calvary. Knocked from his horse by the Northern Cheyenne warrior woman Buffalo Calf Trail Woman and killed while running away, for his bravery Custer was promoted to the rank of general after his death and inglorious defeat.

Natives made Custer famous by killing him. To empire’s chagrin these same nations still celebrate this historic victory as a declaration of their prior and continuing independence, a week before the US’s own self-described “independence” from the British Empire. But a false image of Custer making a heroic last stand still lingers and does important political work. A last stand reverses the role of invasion and self-defense. It’s as innocent as playing cowboys and Indians, right? Who wants to be the Indians? (Put your hand down, Johnny Depp.)

Settlers often see themselves as victims, who are, just like Custer, surrounded by hostile, dark nations. Such depictions litter the genre of Western films. But a move to innocence isn’t harmless Americana. It’s the founding doctrine of the US and its counterinsurgency programs. It has been the justification for slavery, genocide, and war. One only need to read the Declaration of Independence to understand the origins of this clever inversion of history where aggressors become victims and where colonialism looks like self-defense.

The Declaration of Independence is an unlikely yet foundational location for US counterinsurgency doctrine. In the same breath that the “founding fathers” condemned arbitrary rule by an overseas sovereign, they called for the defense against those whose bodies they stole and those whose lands they took or intended to take. King George, they wrote, “has excited domestic [slave] insurrections amongst us, and has endeavoured to bring on the inhabitants of our frontiers, the merciless Indian Savages whose known rule of warfare, is an undistinguished destruction of all ages, sexes[,] and conditions.”