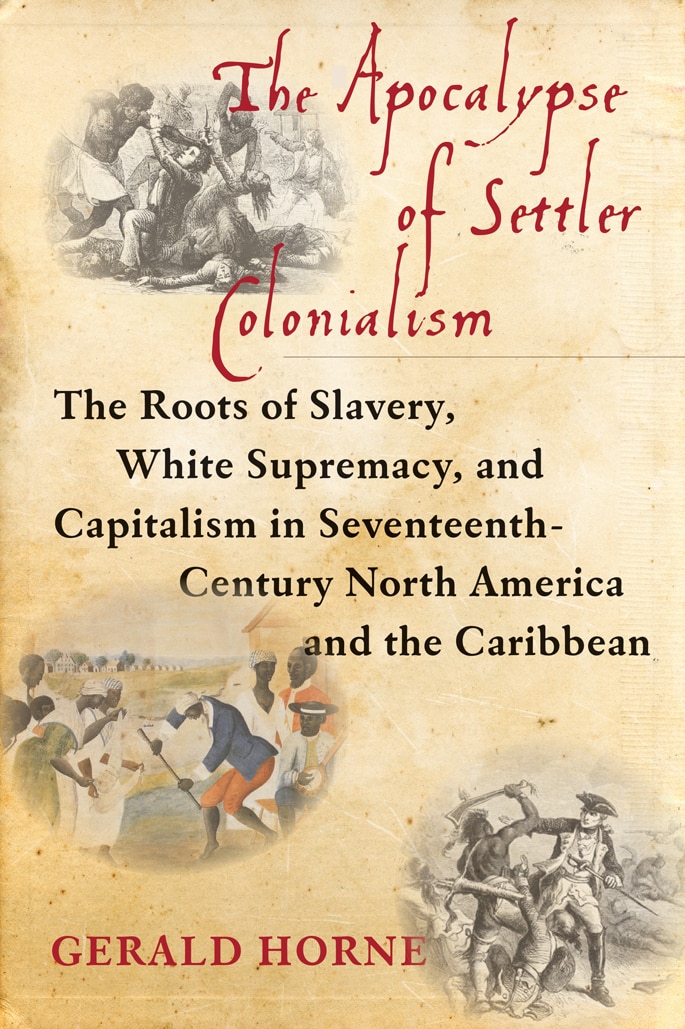 The Roots of Slavery, White Supremacy, and Capitalism in Seventeenth-Century North America and the Caribbean

Virtually no part of the modern United States—the economy, education, constitutional law, religious institutions, sports, literature, economics, even protest movements—can be understood without first understanding the slavery and dispossession that laid its foundation. To that end, historian Gerald Horne digs deeply into Europe’s colonization of Africa and the New World, when, from Columbus’s arrival until the Civil War, some 13 million Africans and some 5 million Native Americans were forced to build and cultivate a society extolling “liberty and justice for all.” The seventeenth century was, according to Horne, an era when the roots of slavery, white supremacy, and capitalism became inextricably tangled into a complex history involving war and revolts in Europe, England’s conquest of the Scots and Irish, the development of formidable new weaponry able to ensure Europe’s colonial dominance, the rebel merchants of North America who created “these United States,” and the hordes of Europeans whose newfound opportunities in this “free” land amounted to “combat pay” for their efforts as “white” settlers.

Centering his book on the Eastern Seaboard of North America, the Caribbean, Africa, and what is now Great Britain, Horne provides a deeply researched, harrowing account of the apocalyptic loss and misery that likely has no parallel in human history. This is an essential book that will not allow history to be told by the victors. It is especially needed now, in the age of Trump. For it has never been more vital, Horne writes, “to shed light on the contemporary moment wherein it appears that these malevolent forces have received a new lease on life.”

Gerald Horne returns to the scene of the crimes that birthed the modern world. With cinematic flair, he takes us through what at first may appear to be familiar terrain—slavery, dispossession, settler colonialism, the origins of capitalism—but by extending his analytical lens to the entire globe, he delivers a fresh interpretation of the 17th century. His careful attention to European militarism, technology, national and imperial political dynamics disrupt the now common Anglo North American story of the emergence of whiteness, racial slavery, and class consolidation. Thanks to Horne, what Marx once called the ‘secret of primitive accumulation’ is no longer such a secret.

This is history as it should be done. Acutely perceptive and solidly documented, lucidly presented and uncompromising in its conclusions, The Apocalypse of Settler Colonialism reveals the roots of our present socioeconomic nightmare with a force and clarity unrivaled by anything previously available. Gerald Horne, already a leading voice in forging a counterhegemonic understanding of the ‘empire of liberty’ we now inhabit, has truly surpassed himself. This book simply must be read.

Gerald Horne strengthens his stature as one of our leading global historians with this ambitious and engaging book. Taking settler colonialism seriously as central to the development of whiteness, he brilliantly situates changes in that tiny part of the 17th century world in what would become the U.S. within far wider worlds of increasingly racialized commodities and cruelties. Among much else Horne demonstrates that colonies were not marginal to capitalism nor to the politics of the colonial powers.

Drilling down in the 17th Century Atlantic world made by European colonialism through invasions, occupations, ethnic cleansing, and enslavement of Indigenous Peoples of the Americas and Africa, historian Gerald Horne reveals the roots of white nationalism and capitalism, the pillars of the United States political-economy today. This brilliant, concise monograph is a must-read for all who propose to change the social order.

One of the preeminent global historians of repression and resistance, Gerald Horne has done it again. The Apocalypse of Settler Colonialism follows the “three horsemen” that gave rise to the West: slavery, white supremacy, and capitalism. Horne’s erudite look at this seventeenth-century apocalypse brings together the hemispheric struggles of Black and Indigenous peoples for reparations. He shows that transnational solidarity is the greatest foe of settler colonial domination.

The Apocalypse of Settler Colonialism interrogates the roots of white supremacy, enslavement, and racism in the United States. Horne focuses on reconstructing England’s emergence as an empire and the impact of Cromwell’s ‘Glorious Revolution’ on its colonies in the Western Hemisphere in the 17th and early 18th centuries. He notes the ascendancy of the class interests of the ‘surging merchants’ or bourgeoisie in England and their white settler counterparts in the colonies, particularly in North America. The relationship between England’s Caribbean sugar colonies, particularly Jamaica and Barbados, with its settler colonies, is also explored. Horne’s text has relevance for our contemporary political reality and the persistence of settler colonialism ideology, structural racism, and racial capitalism today. His assessment that calls for a ‘massive program of reparations’ from African and Indigenous people to ‘repair immense damage inflicted over centuries’ is provocative and intriguing. The Apocalypse of Setter Colonialism is a must-read for all wishing to understand the historical roots of race oppression in the U.S. today.

Gerald Horne’s The Apocalypse of Settler Colonialism is a meticulous history of the colonial era, one that opens portals into understanding the power of white nationalism to determine contemporary elections. Horne’s well-researched text maps the evolution of historical cross-class alliances among Europeans and settlers that enabled white voters to consistently choose racial animus over decency. Imperial capitalism, rapacious colonialism, human trade, genocidal wars—all were incubated by the white racism that stabilizes the present order. Apocalypse details how centuries of warfare, greed or need in both the ‘old’ and ‘new’ worlds were resolved by slavery and the spilling of African and Indigenous blood. Despite the efforts of maroonage to stem its rise, a ‘master race’ addicted to a b`ete noire-as-cash crop thrived. Essential reading for those who wish to comprehend how the past led to the violence of the present order, and how best to plot an alternate trajectory.