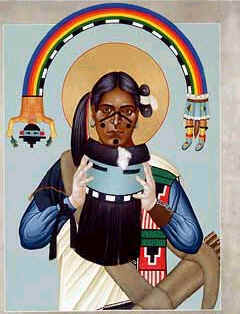 At the core of European legal thought is sustaining binaries such as the colonizer v. the colonized, the conqueror v. the conquered, the civilized v. the savage, or the male v. the female. During her lecture on systemic violence at Concordia University, Andrea Smith explains how colonialism legitimized gender violence through the installation of patriarchy, a male system of domination over females (Smith, 2011). Smith (2011) states:

Patriarchy in Native communities was essential to create a hierarchy “so that colonial domination would seem natural” (Smith, 2011, 2:13). Many North American Indigenous communities were matriarchal, which is in direct opposition to patriarchy and colonialism (Smith, 1999). The ways in which patriarchy furthered the expansion of colonialism occurred through sexual violence, the forced removal of children from their homes to residential schools, and the annihilation of Indigenous languages and cultures (McGeough, 2008). For Indigenous peoples, the loss of language translates to a loss of connection to their culture and other systems of being.

In Medicine Bundle of Contradictions, an essay authored by Lous Esme Cruz (2011), the limitations of the English language are examined in relation to Indigenous identities and gender identities. Cruz (2011) writes, “English is a very limited language that doesn’t give very many options for explaining gender expression and roles” (p. 54). Frantz Fanon (2004) in his work entitled Wretched of the Earth defines colonialism as the “entire conquest of land and people” (p. 14). Indigenous peoples were colonized through the loss of their land and languages and through—the less often talked about—the loss of important gender roles within their culture. Cruz states further, “gender is not a culture, it is a role within culture” (p. 55). Sometimes erased from this discussion of colonialism and loss of culture for Indigenous peoples is the loss of gender roles that exists outside the Western gender binary, male/female. For this paper, I will explore the connection between loss of language and colonialism and how the loss of language impacts gender identities in Indigenous populations. This paper will contribute to the larger discussion of gender identity, how both Western concepts and the English language is restrictive for gender roles and expressions, and the importance of language revitalization for Indigenous peoples.

Click here to read the entire article on Kwe Today…