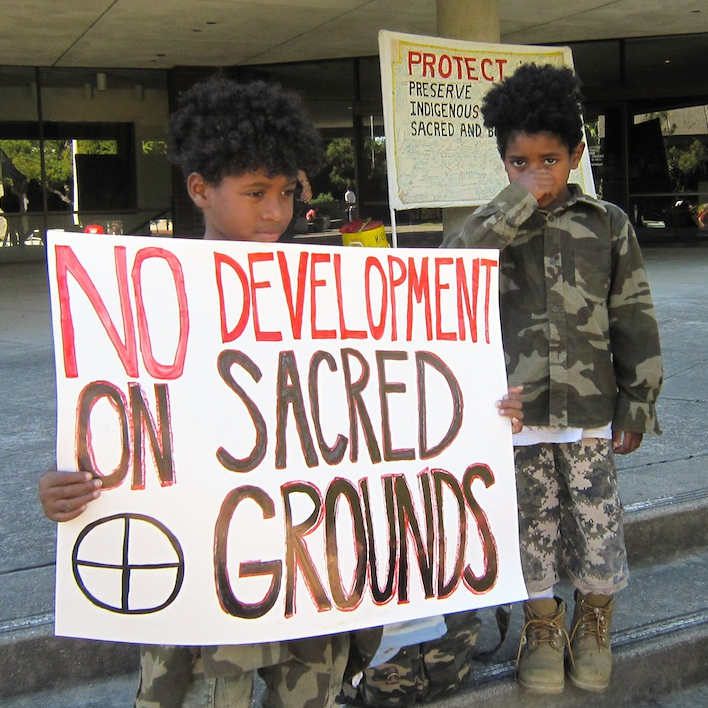 By Decolonize the New World

As the one year anniversary of the encampment at Oscar Grant Plaza approaches, we as organizers within the Occupy, Decolonize and Anti-Capitalist movements find ourselves faced with new challenges and opportunities. Thousands have been inspired and served by the camp and important connections have been made that have served to strengthen us in the face of even the most brutal repression. We continue to defy the police state, we continue to open public space, to farm, to build the world we want to see. We now are faced with questions of how to push these critiques of capital and the State further and to continue to strengthen and develop ourselves across scenes and communities. To find these answers we need to first look at the ground we walk.

We walk every day on land that is not ours. We step on the bones of ancestors whose remains are not legitimized by the State. We live in a place where the graves of indigenous people are bulldozed and paved over because they do not belong to a federally recognized tribe, because they are invisibilized by colonialism. We ride bikes and walk with friends over ground that is sacred to indigenous people in this area because park districts allow paths to go through these places without regard for their meaning. The indigenous people of the land where you walk are still living and still fighting, and we have the opportunity to fight for these places with them.

The process of colonization is one of invisiblization. It is the process of erasing language, culture and history. It is the process by which an oppressive force seeks to tell the inhabitants of the colonized place that they no longer exist, they are no longer legitimate. The desecration of shellmounds (burial sites) and other sacred sites in this area is illustration of how this process works. It is a statement that these places do not matter, they do not exist, neither do the people who are tied to them. City government and area parks and recreation departments argue that access to parks and other pieces of undeveloped land trumps the desires of native people in the area. And even when these bodies do decide to listen to native voices, they look primarily to groups of federally recognized tribes. These tribes usually gain such recognition by succumbing to pressures by the government to relinquish their land and their ways. For those who refuse to be erased, for those who refuse to be invisible, the struggle is hard-fought, and ongoing.

In the Bay Area, bands of Ohlone people have loved, cared for and lived in this wonderful place for millennia and survived after they were nearly decimated. For those of us who are not indigenous to this land, for those of us whose ancestors arrived from distant places, and especially for those of us who are recently arrived to this beautiful place, it is important to remember and recognize that fact. It is important to recognize that in spite of this systematic genocide, the Ohlone people, their language, their ceremonies and songs have survived. They have survived through their connection to the earth, through their connection to this place.

In developing ourselves within the Occupy and Decolonize movements as well as within the anti-capitalist movement, me must constantly go through the process of acknowledging connection to land, acknowledging the living, active resistance in local indigenous communities where we live. Failing to form these connections and to acknowledge the presence of local indigenous people does a terrible disservice to our movements and perpetuates the colonial ideologies and institutions we purport to deconstruct.

Here in the Bay Area, Ohlone people have requested the presence of supporters at the last of several key public meetings of the East Bay Regional Parks District on October 9th in Richmond. These meetings are meant to gain public input on the Park District’s long-term vision as it revises its master plan. The Park District has control over many sites that are sacred to Ohlone people. Its master plan is vague at best in its vision for some of the most sacred sites and includes no real space for native voices to be heard on how best to care for the land and their sacred places. Please see the callout for more details.

We encourage anyone reading this, and especially those looking to plan a solidarity action, to reach out to the people whose land they occupy, and to work together to break down colonial structures starting at home. We have nothing to lose but our chains.